*This article is posted on Owlscoop. 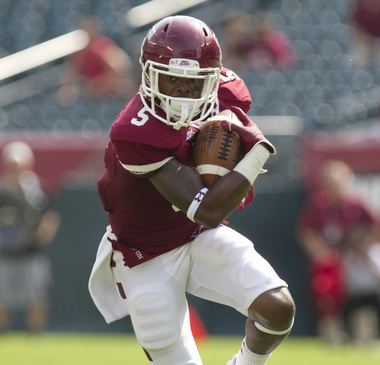 When Temple football coach Matt Rhule sat with his team in the film room Monday night, it was more than just breaking down game footage of Cincinnati, Saturday’s opponent.

Rhule also showed video of the 2011 signing class, which featured senior Jalen Fitzpatrick and a few other seniors who are playing their final season with the Owls.

“We were watching the highlights, it was like a stroll down memory lane,” Rhule said. “For these guys, their path was to stay here and to live through different coaches and different assistant coaches. I couldn’t be more grateful to them and for some of them to play their best football their senior year and have us be on the brink of having the chance of going back to a bowl.”

Fitzpatrick is having the best season of his collegiate career. The former Harrisburg High School standout and his teammates are one win away from helping Temple become bowl-eligible with just two games left on the schedule. The 5-foot-10-inch wide receiver has six touchdowns and 641 receiving yards.

Two Saturdays ago, playing with a sprained knee and ankle, Fitzpatrick caught a 75-yard touchdown pass and finished with 113 receiving yards in a loss to Penn State. He has 11 touchdowns and 1,417 yards over the course of his career as he approaches his last two games.

“I think he has made some real strides,” Rhule said. “He has really become one of the best receivers in the league. He has become a dominant player. He has taken some games over and made some plays when we needed him.”

Before he became a standout receiver at Temple, Fitzpatrick earned an invitation to the prestigious Big 33 all-star showcase game as a quarterback.

“I didn’t start playing quarterback and taking it seriously until I was eight years old,” Fitzpatrick said. “And from there, I never played another position.”

Fitzpatrick took the traditional route, as he started his ninth grade year on Harrisburg’s freshman team. But he worked his way up and split time between the Cougars’ junior varsity and varsity teams before sticking with the varsity squad as a junior.

As a senior, Fitzpatrick led Harrisburg to a 9-3 record and a PIAA state playoff run. The dual-threat quarterback had 1,757 passing yards and rushed for 1,116 yards while throwing 30 touchdowns during his career.

Then the Big 33 game offered Fitzpatrick a look at his future.

“That was the first time I ever played receiver,” he said.

Rhule, then a Temple assistant coach, recruited Fitzpatrick, who had previously committed to Old Dominion before de-committing and signing with Temple and taking his only FBS scholarship offer.

With other quarterbacks on the 2011 roster, then-head coach Steve Addazio had other plans for Fitzpatrick.

“I had a meeting with Coach Addazio and he asked me what position I thought I would be good at, and I told him wide receiver,” Fitzpatrick said. “He actually wanted me to play cornerback and he told me he would try me at wide receiver and see how I looked and I just ran with it from there. He liked how I looked from there. So I played receiver, a little bit of running back. I just stayed on offense.”

It wasn’t difficult for Fitzpatrick to get accustomed to the receiving position because as a former quarterback, he could read the different defensive coverages.

“I thought I had a good feel for coverages and how to get open,” he said. “I thought I had pretty good hands and I always wanted to wear gloves because I never really wore gloves playing football.”

Fitzpatrick helped the Owls to a 9-4 record and a Gildan New Mexico Bowl win over Wyoming as a freshman before breaking out to the tune of 30 receptions for 363 yards and two touchdowns as a sophomore.

And when Addazio left to take the job at Boston College and Rhule returned after a one-year stint as an assistant offensive line coach with the New York Giants to replace him, Fitzpatrick said he was not affected by the switch or the change in offensive scheme that came with it.

“For me, I wasn’t really recruited,” Fitzgerald said. “I didn’t have a lot of offers anyways, so I was just thankful to be in school. I didn’t really care about that. I just thought to myself no matter what the situation might be, I would just seize the opportunity and make the best of it.”

Temple took its share of lumps and frustrating close losses in a 2-10 season in 2013. Fitzpatrick collected three touchdowns and 429 receiving yards while most of the big plays went to Robby Anderson, who was dismissed from Temple due to academics last January.

With Anderson gone, Walker and the Owls needed another downfield threat, and Fitzpatrick has been that player this season. He scored touchdowns in each of Temple’s first five games and has had three games in which he collected more than 100 yards receiving – against Tulsa (107), UConn (108) and Penn State (113).

“He will be one of the guys who will lead us there,” Rhule said when talking about the possibility of playing in a bowl game. “We won’t go if he doesn’t play really well. I expect him to play well because he is such a really good player.”

And once Fitzpatrick and his fellow seniors are honored Saturday on Senior Day, he’ll have the opportunity to prove his coach right.