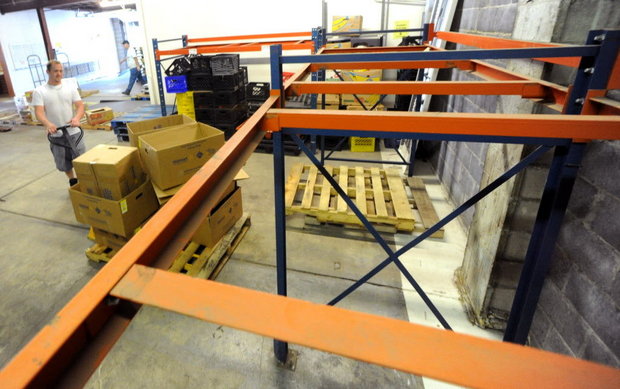 The NORWESCAP food bank has lots of empty shelf space after losing several suppliers that donated salvaged items. Employee Shawn French moves a flat of empty boxes out of an area where the shelves are usually filled with food. (Express-Times Photo | SUE BEYER)

But this summer, many of its shelves are bare.

NORWESCAP’s stock dropped drastically when a grocery reclamation center stopped sending along food about three months ago, according to development coordinator Janet Bray.

Dented cans and surplus foods that were once donated to Northwest New Jersey Community Action Partnership are now being purchased by chains such as Family Dollar.

They’re not the only ones suffering from a shortfall of donations.

The Second Harvest Food Bank of Lehigh Valley and Northeast Pennsylvania’s food drive donation is “pretty slim this time of the year,” according to director Ann McManus.

The Trinity United Methodist Church Lord’s Panty in Hackettstown relies on donations, according to Sandy Pattky. Food and funds are in short supply this summer, she said.

“People are very generous during the holidays because there is a lot of awareness about hunger,” Pattky said. “I guess during the summer months people have other things on their minds.”

That does not stop individuals from stopping by. Pattky said families with children go to the pantry for food during the summer when they can’t get federally subsidized meals at school.

The number of people relying on the River of Life Presbyterian Church Food Pantry in Phillipsburg is up 62 percent for the first six months of this year, according to coordinator Maureen McDonald.

“There are a lot more hungry people out there this year than there were last year,” McDonald said.

McManus said Second Harvest has been able to stay afloat and supply its 184 agencies because of U.S. Department of Agriculture bonus commodities like raisins, orange juice concentrate and frozen blueberries. The food bank has a fairly large stock of basic foods like ground beef, noodles, pasta, pasta sauce, cereal and rice, McManus said.

A reduction in the federal funding for food stamps has led more families to food pantries.

Benefits from the 2009 federal stimulus expired in November, causing a 5 percent drop in the $80 billion-a-year federal program according to Feeding America, which makes up the largest network of food banks in the U.S.

As of May there were 1.8 million people on food stamps in Pennsylvania, according to Janet Ney, coordinator of advocacy and outreach for Second Harvest.

“That meant that those folks who were losing money would show up at our pantry needing food,” Ney said.