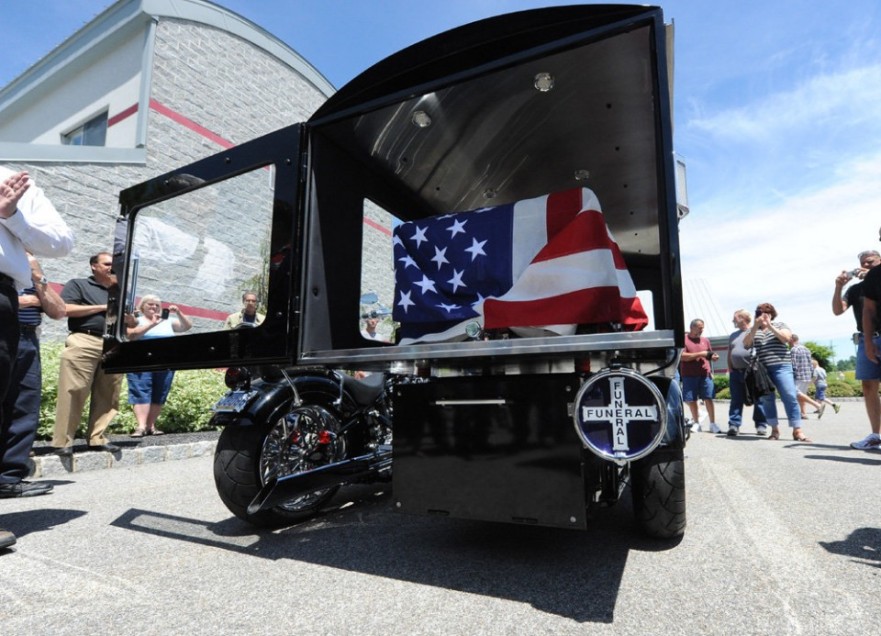 Hellertown’s Heintzelman Funeral Home commissioned a motorcycle hearse with a sidecar for the casket from Orange County Choppers, of the reality TV show “American Chopper” fame. Tim Wynkoop | For lehighvalleylive.com

If you want to make your final journey in style, David Heintzelman is your man.

The co-supervisor of Heintzelman Funeral Home in Hellertown traveled to New York today to pick up a motorcycle-driven hearse.

It’s a chopper, actually, custom made over six months by Orange County Choppers. The company was made famous by the former reality show “American Chopper.”

The motorcycle-driven hearse will join two other motorcycle hearses in Forever Remembered Hearse Co., run by Heintzelman and his brother Robert.

David Heintzelman said the intent of the new hearse is to give back to the biker community “so a biker can enjoy their last drive.”

Bikers aren’t the only ones who have taken such a route. Heintzelman said other families pick a motorcycle hearse because they want something different than the traditional limousine.

“The only way you survive the competition with the industry as it is, is to be a step ahead,” he said.

Heintzelman’s other two motorcycle hearses are attached to trailers, but the newest edition features the hearse as a sidecar. It has two reproduction 1930s antique funeral lights, one in the front and the other in the back.

An Orange County Choppers representative called it one of a kind, the first motorcycle-driven hearse for the company.

The black pearl chopper is more than just polished chrome for Heintzelman.

“The thing about this bike is not the looks. It is the driveability,” said Heintzelman, who took delivery of the vehicle today, with “American Chopper” star Paul Teutul Sr. rolling it out.

Heintzelman said Teutul was involved throughout the design and production of the bike.

“I got to see a different side of Paul Sr. than what you see in the TV star,” he said today as the chopper was being hauled to Hellertown. “He is a gentleman’s gentleman. He believes in his workers and his workers believe in him. He really has a genuineness that I don’t think people know.

“He made a bike that is functional, solid and a helluva lot of fun to ride.”

The funeral director is a motorcycle enthusiast who has owned Harley-Davidsons and plans to use his new bike “as soon as the phone rings.” He plans to display it during community days in the Hellertown area and at a hog rally planned for July at Sands Casino Resort Bethlehem.

Along with the other two motorcycle hearses, Heintzelman Funeral Home also has a horse-drawn hearse, a 1951 Packard side-loader hearse and other model hearses including Cadillacs and Lincolns.

The Heintzelmans have traveled to places like New York City and Baltimore to share their unique automobiles with other funeral homes. It’s been in business for 30 years.

The funeral home at 326 Main St. in Hellertown offers religious and contemporary services, and has displayed a motorcycle and family wagon inside on a few occasions.

Heintzelman won’t say how much he paid for the motorcycle, just that it fits well with the motto at Forever Remembered.

“It’s not the destination. … It’s the journey,” Heintzelman said.