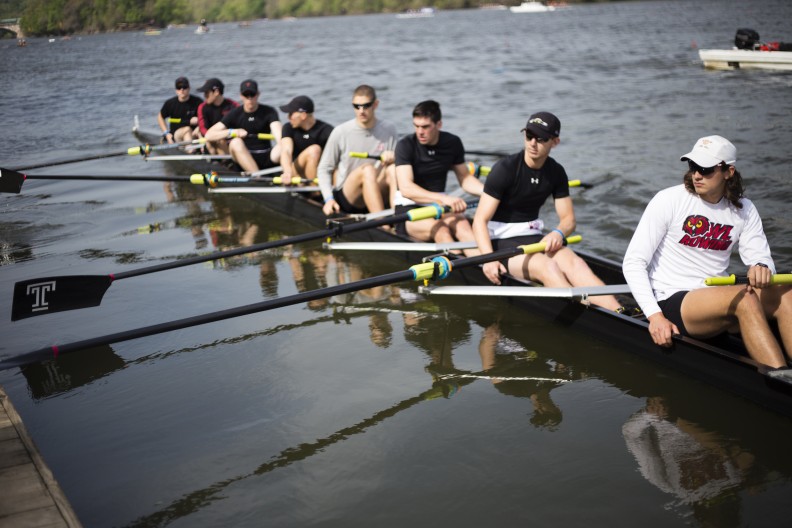 The varsity eight boat launches off to warm up before its race at the Dad Vail Regatta. | KARA MILSTEIN TTN

The Owls were battling with Virginia for third place for much of the race after Drexel and Michigan took off in front of the rest of its competitors. Virginia, a team the Owls were familiar with as they both have one win against each other this season. Yet, the boat was unsure whether the Cavaliers had changed their lineup

After finishing third in the semi-finals and earning lane six for the finals, co-captain Zephyr Dippel said the lane proved to be beneficial because the water in their lane was a “little smoother.” With less than 700 meters to go the Owls overtook Virginia but could not surpass Michigan to finish third in a time of 6 minutes, 47 seconds.

“I was really happy for the kids that they got some medals,” coach Gavin White said. “It’s a good thing to built on for next year.

The varsity four and novice four did not make it out of the semifinals on Saturday.

With the top two boats qualifying for the finals, the varsity eight boat were battling for second place with Virginia throughout the first 1000 meter. As the race went on, the Owls gradually began to trail the Cavaliers by half-a-boat length but the Owls fell behind the Cavaliers for good with less than 500 meters to go. Junior Josha Kuzo said when Virginia took control of second place the boat “kind of gave up.”

“When we got into the boat, nothing really clicked, there was no cohesion,” Kuzo said. “In this sport you have eight people trying to take the boat across the river, they better work together or they are not going anywhere and really it didn’t go anywhere.”

The varsity eight finished fifth in the semi-finals behind FIT, Virginia, Villanova and Lehigh in 6:07.

The novice four led by coxswain Kati Funck finished outside of finals contention. The Owls earned a third place finish behind Oklahoma City and Michigan in 6:47. The varsity four placed fifth in the heats on Friday.

Although the Owls finished below the team’s expectation, White said this year’s Dad Vails is something to build on for next year.

The Owls look to compete in the Intercollegiate Regatta Association Championship in June.