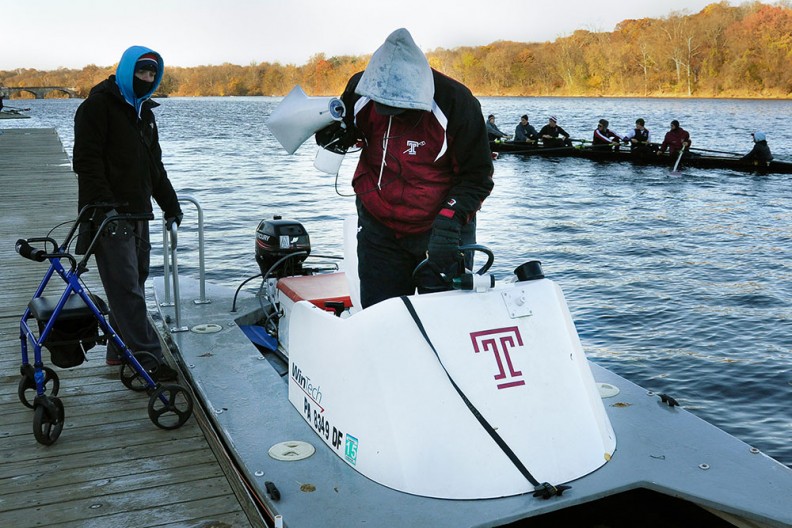 Photo courtesy of The Temple News.

Before the start of each 6 a.m. crew practice, coach Gavin White tunes the car stereo to 93.7 WSTW, where he and members of the team hear artists like Pink, Rihanna, Maroon 5 and Miley Cyrus.

“I really like this station,” White said. “They have a short playlist but I like it. It’s a good pre-race station. Last week, I said to the guys, ‘I don’t know what you listen to on the radio now.’ All they listen to is garbage. One guy got smart and said, ‘Coach, you like Christmas music?’ I said, ‘Yeah, I like Christmas music.’ Then they started singing ‘White Christmas.’”

White, who is one of the most decorated coaches in Temple history, has been running the crew program for more than three decades. In 2002, however, a medical diagnosis would change his life.

Doctors informed White that he has Parkinson’s disease – a brain disorder that affects a person’s ability to move, with tremors being the most noted symptom.

“They put electrodes in my brain,” White said. “I have a box in my chest, like an electric programmer that sends electric voltages and dopamine to my brain.”

“My body is breaking down,” White added. “My hands shake, my handwriting is terrible, it’s all scribbles. Taking all the medicine is a pain in the neck. My brain is pretty sharp. I can remember stuff. Long-term memory is great but short-term memory is tough. I can’t remember what I had for breakfast this morning but I can tell you what I had for breakfast 15 years ago on a certain date… The hard part is knowing that I am really not going to ever get better.”

The disease has slurred White’s speech and slowed his ability to walk, so he now uses a walker and a cane to assist him in getting around, especially when preparing for practices.

“From the waist down, I have a tough time walking,” White said. “Just getting around is a pain, especially getting up and down on that dock.”

The dock that Temple uses to get to the river has a steep downward slope. With the help of his walker, White takes precautions, walking slowly along the railing to get to the boat.

“In fact, my walker, I gave one of the guys to put it on the sidewalk while I was on the river and he forgot to put the brakes on,” White said. “We were rowing down the river and at one point Fergal [Barry] said, ‘Coach, isn’t that your walker floating in the river?’”

Before White was diagnosed with Parkinson’s, the 6 a.m. practices were not as difficult as they are now.

“I could get up at 5 a.m. and get out of the house by 5:15 a.m. and be [at the Schuylkill River] before the guys get here,” White said. “Now I have to get up at 4:15 a.m. It just takes me longer to do everything. It takes longer to get dressed, to get to my car because I have to be careful. Everything just takes longer, so I add an extra half an hour on to everything that I do.”

“You have to give him credit for getting out here every day even with his Parkinson’s,” senior Zephyr Dippel said. “It has to be tough.”

Despite the many adjustments White has to make, he said he believes his Parkinson’s has not affected his coaching abilities.

“My brain still operates fine,” White said. “That’s the thing about rowing. I can sit in a boat and drive while I talk to the guys. I am still able to coach OK because of that. I am a rowing geek. When I am not coaching, I am looking at [the row2K] website.”

Throughout his career, White has made his mark on the sport. He has led his crew teams to 20 Dad Vail Regatta Varsity 8 titles, the nation’s largest collegiate rowing competition. The team won a record 13 consecutive titles from 1989-2001.

After being diagnosed, White was not deterred – his team won the Dad Vail Regatta twice, in 2003 and 2004. Within his 34 years of coaching, White has enjoyed a wealth of achievements on the national and international stage. In 2000, White coached the men’s four in the Sydney Olympics. He is a five-time coach for the U.S. national rowing team. He also coached the men’s four to a gold performance in the 2003 FISA World Rowing Championships.

After 34 years at the helm of the crew program, White said he believes he can still contribute well into the future.

“I can coach for 10 years,” White said. “I don’t feel sick. I have Parkinson’s, yeah, but other than the tremors, dyskinesia and the walking I feel fine. But at some point I have to weigh when [I’m] being selfish and what is in the best interest of these kids. I have to sit down with my wife and see at what point I am no longer able to do a good job with these guys as I could be.”

White’s accomplishments have stretched well across the Atlantic.

“That was one of the reasons why I came to Temple,” Barry said. “My friends have gone here before and they were big advocates for Dr. White so that drove me to come here.”

“I have always heard about coach White because one of my coaches at [Philadelphia University] went here,” Dippel said. “I am just proud to be a part of the history of coach White.”