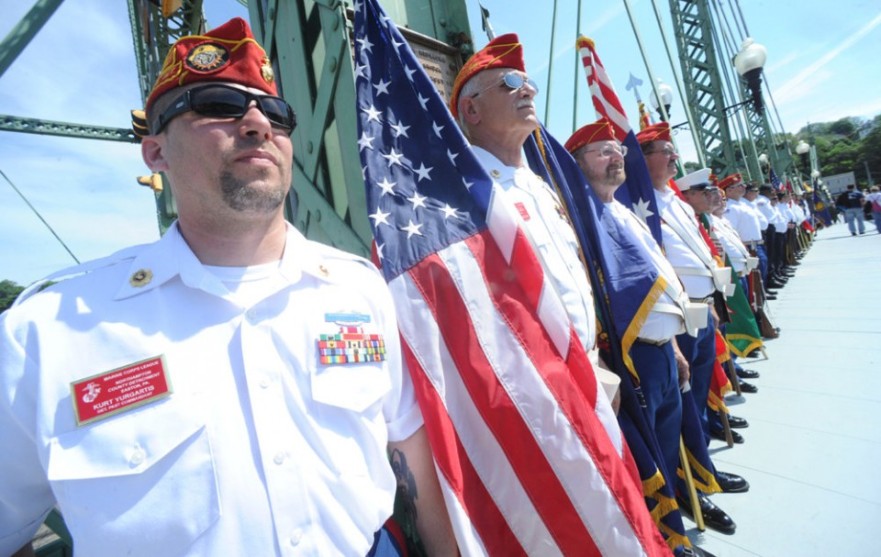 Kurt Yurgartis, left, with the members of the Northampton County Marine Corps League, stand at attention on the Easton-Phillipsburg free bridge on May 26, 2014, during the Memorial Day observance.
Sue Beyer | For lehighvalleylive.com

After the 115th anniversary Easton Memorial Day parade, Ernest Brown did not leave.

Instead, he stayed to watch as officials from Easton and Phillipsburg dropped a wreath and flowers into the Delaware River to commemorate the lives of those who died while serving in the U.S. armed forces.

“I wanted to stay to also honor those who have fallen,” said Brown, of Palmer Township.

He is all too familiar with war. Brown served two tours of duty in the Korean War from 1951 to 1954 with the 7th Marine regiment.

“It wasn’t a pleasant one while I was in Korea but I never regretted it,” Brown said.

While the wreath and flowers were floating in the river, the Pennsylvania Water Rescue Squad launched a memorial float.

Hundreds from both sides of the Delaware joined on the free bridge for the ceremony, which is preceded by events at Scott Park in Easton and Shappell Park in Phillipsburg.

At the bridge, veteran Richard Vagger said he makes an effort to come out every year for the wreath-dropping ceremony. Vagger served in the U.S. Navy Seabees, where he spent much of his time in the Caribbean during the 1950s. As a member of the Seabees construction battalion, he said, he helped build roads and airports.

Brown said it seemed as though Memorial Day parades drew more people when he was younger.

Said Vagger: “These younger generations don’t know what happened before them.”

Throughout Easton and elsewhere, flags were lowered to half-staff in honor of Memorial Day.

Jodi Traech brought her family out for the parade as school bands, Boy Scouts, youth groups, local American Legion posts, the Easton Hummingbirds Adventurer Club and others marched from a ceremony at Scott Park to the free bridge.

“I just wanted the kids to know that today was more than just the picnic, parties and the beaches,” Traech said. “It’s about the men and women who serve in the military.”

He paid tribute to veterans and identified several from Northampton County who had sacrificed their lives in defense of the nation.

“Today is the day we put aside to remember our fallen heroes and to pray that no man or woman will ever have to die for us again,” said Panella, of Palmer Township. “We don’t have to look far to see the heroes who have made America what it is today.

“Although I am sure at times we all share feelings of criticism of our government, we should never hesitate to say that the United States is the greatest nation that has ever existed in history, and that we enjoy rights, given to us at the expense of those we honor today.”