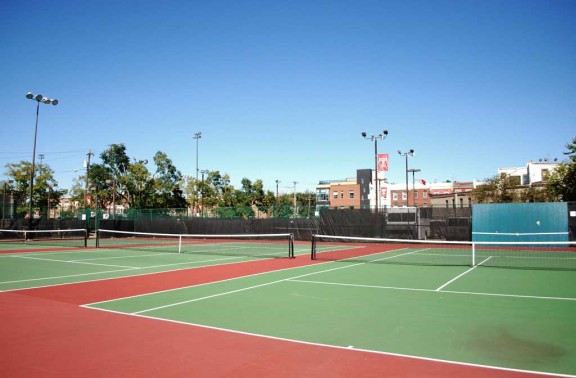 The Temple men’s tennis team was honored for its academic excellence, as they were among 976 sports teams across the nation who garnered public recognition from the NCAA in early June for their performance in the classroom.

Along with the NCAA’s recognition, The Philadelphia Inquirer honored the academic success of the team by selecting two members to be a part of the Inquirer Academic All-Area Men’s Tennis team, which is includes four other players.

Junior Kristian Marquart was recognized for the first time, and for the third year in a row, Kacper Rams was chosen. Both had a cumulative grade point average (GPA) of 3.20 or higher. The Academic All-Area Men’s Tennis team was voted on by the sports information offices of the 28 area institutions from the Philadelphia metropolitan area.

“I was just doing what I was supposed to do,” Rams said. “Simple as that.”

ANDREW THAYER // TTN
ANDREW THAYER // TTN
Rams graduated this past spring with a 3.79 GPA and a bachelor’s degree in finance. Marquart, who has a 3.97 GPA with a major in international business, was excited to hear that he was selected to be a part of a team with student athletes across Philadelphia who also valued the importance of education as much as he did.

“I was really excited to hear that I am selected for Philadelphia Inquirer Academic all area men’s tennis,” Marquart said. “I felt proud to be honored and I was happy to hear that my hard work at school was appreciated.”

Steve Mauro, the coach of Temple’s men’s and women’s tennis teams, was quick to relinquish the honor to his athletes.

“The guys were on the right track,” Mauro said. “I thought they did well. Everyone on the team all worked hard.”

The NCAA pays special attention to Division I sports teams to ensure that just as much focus is placed in the classroom as on the court. Therefore, the NCAA put the Academic Performance Rating (APR) in place, which measures the academic success of sports teams by their retention rate and academic eligibility.

As a result, the coaching staff and the men’s tennis team worked closely with an academic advisor to ensure that different academic resources are available to the team.

“Our academic advisor, [Nick Plack], works with our athletes closely,” Mauro said. “He stays on top of the athletes to make sure that they are doing well in class and if they need tutoring he helps them find tutoring. He also sets up their study hall schedule.”

All the members of the team will be returning for this upcoming season except one.

“One person graduated, [Rams], so we are going to bring in two new players,” Mauro said.

To earn NCAA recognition, sports teams must score in the top 10 percent in their sport’s APR results. While the 2012-2013 APR scores will not be officially released until October, the top 10 percent ranges from 978 to a perfect 1,000. For the past two academic years, the men’s tennis team has fell well within that range, including scoring a perfect 1,000 for the 2011-2012 academic year.

Although Rams suffered nerve damage during the season, he did not allow his injury to interfere with his academic goals, as he was focused on graduating. He also remained a vital member of the team by supporting and giving advice to other team members.

“I had to prioritize and choose what is the most important at particular time[s],” Rams said. “I was pretty good with time management so I was able to do what I had to do in school and in my team.”

Between the academic pressure of the classroom and the expectations on the tennis court, the team seemed to find a balance as the season and semester progressed. Time management became a critical element in ensuring that the student athletes remained focus. For Marquart, it was especially important as he spent much of the season playing first and third singles flights, as well as doubles with his partner, freshman Sam Rundle.

“Time management is something that is very important in order to [do] good [in] school and also [on] the tennis court,” Marquart said. “I think that it [is] also important to set priorities. My priority being at Temple is to do good [in] school and [in] tennis. In my opinion, if someone follows his or her priorities and goals, it is not very hard to balance tennis and school at a college. It is just important to invest the time in your priorities.”

Spain, Germany and Morocco are just a few of the countries the members of the men’s tennis team call home. However, the international diversity has proven to be beneficial because they share the same academic goals.

“One of the reasons they chose Temple was because Temple has such great academic expectations,” Mauro said. “We all…push one another.”

Mauro hopes that the significance of the NCAA’s recognition will continue to shine a positive light on the team, and teams to come, driving them to excel in the classroom.

“One of their goals, besides doing well on the court, is to do well in school,” Mauro said. “So I think this will help push them every year to have one of the highest GPA of all the teams here at Temple.”

While the season is about two months away, Mauro hopes the success in the classroom will carry over onto the court.

“We are a very young team,” Mauro said. “We are in a new conference so we hope our team will improve from last year. I am hoping in our conference that we can go over .500. That would be a considerable feat.”

Marquart, a Germany native, has set both his academic and athletic goals for the year, even though the semester and season is still afar off. Much of the preparation comes as the team will enter the new American Athletic Conference next season.

“The academic goal is to maintain having a good GPA and maybe even to be the top student athlete in classroom according to the Trustee Ten,” Marquart said. “Tennis-wise, it is important that I do a good job as the team captain and that we achieve good results against some of the teams we were not able to win the last semesters.”

Although Rams has graduated, he still hopes to continue to contribute to the team.

“I started full-time job, but I am planning on coming back to Temple as a graduate assistant for tennis team,” said Rams.